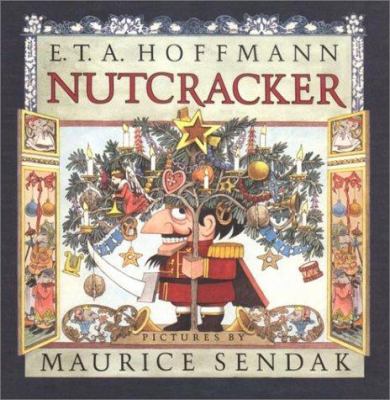 Photograph of the colorful cover of The Nutcracker, by E.T.A. Hoffman, illustrated by Maurice Sendak, published in 1984 by Crown Publishers

There’s something special and a bit mysterious about the winter holidays. In the early darkness, bright lights twinkle, excited people rush about, and sometimes toys and presents magically appear.

That was certainly true in Germany in the early 1800s, the time of Ernst Theodor Wilhelm (he changed Wilhelm to Amadeus because he liked Mozart so much) Hoffmann. DK Eyewitness Classics The Nutcracker  offers a look at the story behind E.T. A. Hoffmann’s wonderful tale of a nutcracker and the little girl who loved him. During Hoffman's life (1776-1822), incredible inventions like ingenious mechanical toys, the magic lantern, and the hot air balloon, along with Napoleon’s terrible but colorful wars, inspired people’s imagination. Hoffmann gathered all these influences - the traditions, the people, the colorful creativity, and the nightmares – and wove them into strange, wildly popular stories, art, and music that reflected this extraordinary time, when dreams of all kinds might come to life.

Alexandre Dumas took The Nutcracker and adapted it to the form we know today. In 1844 he published a sweeter, less scary telling of The Nutcracker, which in turn inspired many additional musicians and choreographers, including Peter Tchaikovsky and Marius Petipa. They had been commissioned in 1891 by the director of the Russian Imperial Theatre to create a ballet, and Dumas’ version of The Nutcracker provided the perfect material. Tchaikovsky’s music was an instant hit, and Petipa’s casting of real children to dance in his ballet was a revelation. Thanks to them, children all over the world can now look forward to dancing onstage as characters in The Nutcracker.

That the Nutcracker ballet became so popular in America is thanks in large part to the Christensen brothers of San Francisco. They staged the first full-length version in the U.S. in California in the 1940s. Read all about in local author Chris Barton’s book, The Nutcracker Comes to America. An interesting fact is that Pacific Northwest Ballet director Kent Stowell asked Maurice Sendak to create the sets for a new version of The Nutcracker in 1979. Another Austin author and artist, Don Tate, illustrated Duke Ellington’s Nutcracker Suite, written by Ann Harwell Celenza. Check out our very own The Van Show for lots of author interviews, including one of Don Tate.

Here are some school children learning the Trepak dance from the Nutcracker ballet – try dancing with them!

Literature Live! loves The Nutcracker, too! Our puppet show is a regular holiday treat, and you can see our current show schedule and a trailer here.  We hope to see you at one of our shows soon!

We have lots and lots of stories and information about E.T.A. Hoffman, The Nutcracker, toys coming to life, and all sorts of related subjects. Check out some of our books and resources below:

The Elves and the Shoemaker
November 8, 2019
LITERATURE LIVE! is celebrating the holiday season by presenting the classic story, The Shoemaker and the Elves....