Which Book Made You? 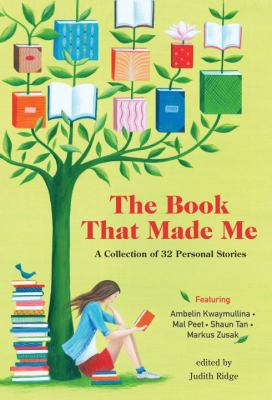 Which Book Made You?

Do you remember the first book you read that meant something to you? The book that made you who you are today? Whether it was a love or a hate relationship, some books have the power to turn our lives on their heads. When we leave the pages of those books, we are very different people than we were when we first opened the cover. That's just the premise of a brand new book, edited by Judith Ridge, called The Book that Made Me.

Inside, there are 32 stories from great authors, like Markus Zusak, Mal Peet, and Shaun Tan. Each of them tells a wonderful story of the book that changed that authors life... including some books that they hated and didn't even finish! One of my favorite quotes from this collection is from Will Kostakis, who said in his tribute to the book he refused to read, (Hatchet by Gary Paulsen), "If nothing speaks to you, then pick up a pen and speak for yourself."

The book that made me would have to be The Neverending Story by Michael Ende. It felt like Ende had been reading my diary and used it to create a whole new story about this strange bookish boy named Bastian. I really identified with that little boy, who had lost his mother and was painfully watching his father bumble his way through solo parenting. I was his twin, when it came to wanting to dive into books to escape the real world. And when the words on the pages came alive, well - wasn't that what I'd been hoping and wishing would happen, each time I picked up a book? I had an especial appreciation for the old - and Bastian's book was just the sort of thing my fingers would have itched to pick up.  While I'd read fantasy before The Neverending Story, I wouldn't have considered it "my genre."  Afterwards, I couldn't get enough, and eagerly read every fantasy novel I could get my hands on, just to have that feeling again that I had when I first opened that book.

So what's the book that made you? You can share it with us, and the whole world, on Instagram or Twitter by using the hashtag #thebookthatmademe

The Elves and the Shoemaker
November 8, 2019
LITERATURE LIVE! is celebrating the holiday season by presenting the classic story, The Shoemaker and the Elves....