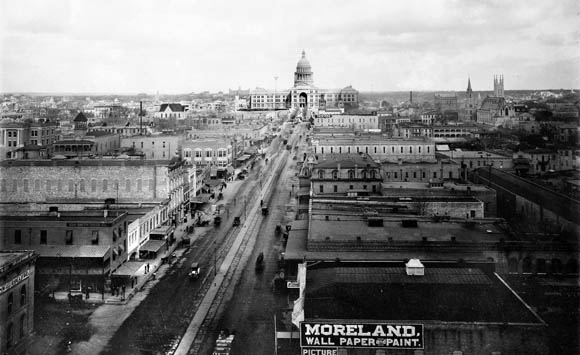 Austin hasn't always been the bustling city that it is today. This gentle bend in the Colorado River had many residents and visitors long before the first cornerstone was laid.

For hundreds of years, nomadic tribes of Tonkawas, Comanches, and Lipan Apaches camped and hunted along the creeks, including what is now known as Barton Springs. In the late 1700s, the Spanish set up temporary missions in the area. In the 1830s the first permanent Anglo settlers arrived and called their village Waterloo.

In 1839, tiny Waterloo was chosen to be the capital of the new Republic of Texas. A new city was built quickly in the wilderness, and was named after Stephen F. Austin, "the father of Texas." Judge Edwin Waller, who was later to become the city's first mayor, surveyed the site and laid out a street plan that has survived largely intact to this day. In October 1839, the entire government of the Republic arrived from Houston in oxcarts. By the next January, the town's population had swollen to 856 people.The new town plan included a hilltop site for a capitol building looking down toward the Colorado River from the head of a broad Congress Avenue. "The Avenue" and Pecan Street (now 6th Street) have remained Austin's principal business streets for the 150 years since. After Texas was annexed by the United States in 1845, it took two statewide elections to keep Austin the capital city.

By the 1880s, Austin was becoming a city. In 1888, a grand capitol building, advertised as the "7th largest building in the world," was completed on the site originally chosen in the 1839 plan. Funded by very creative financing involving the famous XIT Ranch, the building remains a central landmark on the Austin skyline. It has also, of course, remained the center of one of the city's most prominent industries-government. In September of 1881, the Austin City Public Schools admitted their first classes. In that same year, the Tillotson Collegiate and Normal Institute, predecessor of Huston-Tillotson College, opened its doors. Efforts to place the new University of Texas in Austin faced some opposition, however. Parents were warned that sending their sons to school so close to lawmakers would be a terrible influence on their morals.

In 1893, the construction of the Great Granite Dam on the Colorado River was another milestone in the city's growth. The dam stabilized the river and provided hydraulic power to generate electricity, which in turn attracted manufacturers. By 1938, the dam had been replaced by a series of seven U.S. government-funded dams. One official who helped shape these public works was the young congressman Lyndon Baines Johnson, who got his start in government work in Austin.

As Austin emerged from the Depression, the seeds of the city's future as a center of high technology were being carefully planted. By the 1950s, several research laboratories and think tanks had been founded, and began to draw innovative thinkers and high-tech companies to the area--a trend that has continued to this day. As Austin's economy prospered, the area attracted even more modern amenities. Several movie theaters arrived, along with more public swimming pools, a branch library system, and a professional baseball team.

Rapid growth in the 1970s contributed to more political activity, this time at the local level. Strong neighborhood, environmental, and historic preservation communities sprang up, and remain an integral part of Austin's civic life today. In particular, concern about the purity of water flowing from Barton Springs has led to this landmark becoming an icon for many of the "Austin frame of mind."

Diverse cultural groups have been attracted to Austin throughout its history, including immigrants from Europe, Africa, Mexico, and, most recently, Asia. All of these groups have enriched Austin's civic and cultural life, including its recent development as a mecca for music fans. Austin's musical rebirth began in the 1970s, when artists such as David Rodriguez and Willie Nelson drew national attention--and more musicians--to the city. Now, on any given night, scores of artists can be heard playing countless musical styles in the city's nightclubs and concert halls.

Today, Austin is known as much for its cultural life and high-tech innovations as it is for the senators and schoolteachers who shaped its beginnings. The same success that has gained the city a national reputation has brought with it many difficult choices, as the city expands on a scale that might shock the early residents of Waterloo.

As a new century begins, and as Austin completes its transformation from town to city to metro area, the city and its people face decisions on how the city will preserve its past, and how we will allow that past to shape our future.