The Library Website, Catalog, some online Library services and the Virtual Library will be down Sunday, February 23 from 4 AM to 10 AM.

Killers of the Flower Moon 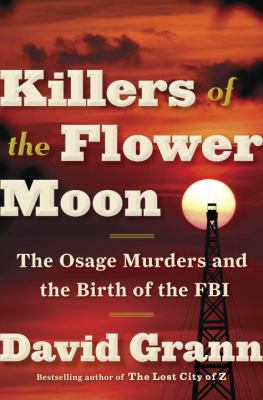 Killers of the Flower Moon

This is a stunning book. In the 19th century, after Jefferson bought the Louisiana Territory from France, the Osage Indians were forced off their land onto a desolate plot in Oklahoma to continue their lives there as best they could.  The reservation sat atop vast fields of oil, and, presciently, the tribe did not sign away its mineral rights. Decades later, with the advent of the internal combustion engine, the Osage found themselves, per capita, the richest group of people in the world.

Some whites did not trust the Osage to spend their fortune wisely; so, claiming to have the best interests of the tribe at heart, the US Government deemed any Osage of half-blood or more incompetent by law and assigned a guardian to each. The guardians were to approve everything their wards bought, even if it cost just a few dollars. Conveniently, it was legal to be an Osage’s estate manager—her guardian, and also to be an Osage's spouse—her heir.

The Osage Murders is the case that launched J. Edgar Hoover’s career and set the FBI on course to becoming the law-enforcement juggernaut it is today. Tom White, sheriff of Austin, Texas, was sent to Oklahoma to head the investigation. A large part of the story is his relationship with Hoover and his pioneering use of new detection techniques.

If you keep in mind who profited from the deaths, the identity of the murderers won’t surprise you, but the scope of the plot, and how the government's guardianship requirements encouraged the killings, are astonishing. The FBI’s intentions were good, but its investigation stopped short. The agency considered its work done once the murders in one family were solved, and missed the wider plan to syphon the tribe's oil wealth into the bank accounts of a lot of thoroughly evil people.

Ebooks for all means digital inclusion for all
October 4, 2019
“Library for All” is more than a slogan for Austin Public Library. Our staff, customers and the entire community...

What was Austin Reading Last Summer?
May 15, 2019
Guest Blog by Vija