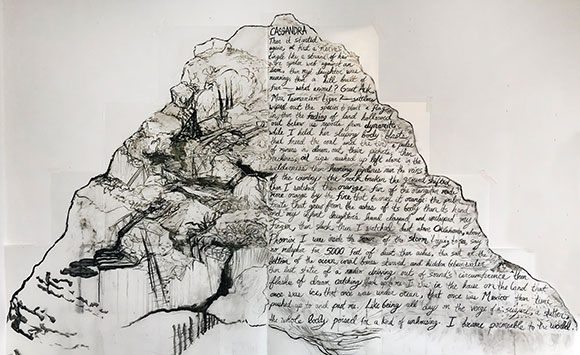 Awake in the Dark

Awake in the Dark is a multimedia exhibition resulting from a collaboration between visual artist Hollis Hammonds and poet Sasha West. The pieces begin what Timothy Morton calls “grief work,” articulating the experience of living in the midst of a fragile, changing ecosystem. Through self-interrogations, the artists question both individual and societal contributions to environmental crisis. Viewers dwell in wreckage, suspended between flood and fire, stasis and loss. Objects lose their meaning as markers for a normal existence. In these works, the distinction between natural and human-made disasters starts to collapse.

Hammonds’ drawings reflect the melancholy and darkness manifest in West’s poems, asking us to reexamine the impact of elements when those elements are fed by human actions. Hammonds often draws inspiration from a fire that consumed her childhood home in Independence, Kentucky, when she was 15 years old. In the context of climate change, that displacement takes on new meaning. Rather than being an aberration of the past, the incident foretells a potentially apocalyptic future.

West’s poems connect to the landscapes of ruin in Hammonds’ drawing, questioning our culture’s belief in limitless growth. Collapsing time, her speakers range across eras and historical events to try and articulate their role as witnesses in the first generation to feel palpably the effects of climate change (mere decades after global warming was first named). Her speakers work to name the complex spaces of responsibility, despair, and hope.

Combining sound with sculptural installation and words with images, both artists offer their personal vantage points on the precipice of a forbidding future. The show opens liminal spaces where hard boundaries dissolve: past disasters forecast future ones, the crackle of fire becomes the cracking of ice, what is civilization becomes wilderness. Hammonds and West invite viewers to see anew their own part in making the physical world and, thus, the future.

Built on threads of personal memory, Hammonds’ drawings and found-object installations investigate a variety of social issues, from economic disparity to environmental degradation. Hammonds’ work is derived from what she terms the “collective consciousness.” Gleaning images from the Internet and objects from street corners, she reconstructs personal stories, conjured memories, and projected social fantasies. Her work has been widely exhibited throughout the US, including venues such as Women & Their Work, Redux Contemporary Art Center, The Grace Museum, and the Dishman Art Museum. She is a Professor of Art and Chair of the Department of Visual Studies at St. Edward’s University in Austin, TX.

Sasha West’s work examines the underpinning narratives of Western civilization and their impact on landscape, environment, species, and human psychology. West combines mythology with research into late-stage capitalism to examine the world in which we find ourselves—and to imagine the world we will choose to hand down. Her first book, Failure and I Bury the Body, won the National Poetry Series and the Texas Institute of Letters First Book of Poetry Award. Her book How To Abandon Ship is forthcoming from Four Way Books. She has received numerous awards, including a Bread Loaf Writers’ Conference Fellowship, Rice University’s Parks Fellowship, Inprint’s Verlaine Prize, and a Houston Arts Alliance Grant. She is an Associate Professor of Creative Writing at St. Edward’s University in Austin, TX.