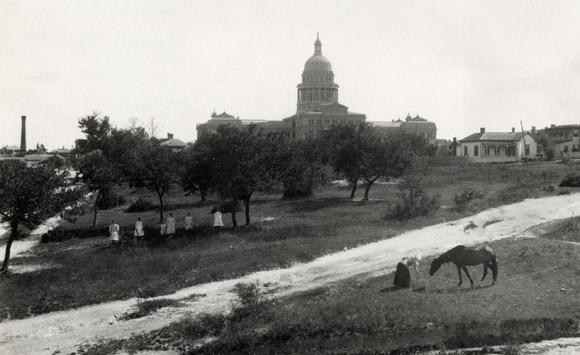 The Austin History Center has partnered with the University of North Texas' Portal to Texas History and the Texas State Library and Archives Commission to bring selections from some of our most interesting photo collections online. Browse all of our images available on the Portal or use the links below to browse specific collections. A selection of photographs from our collections is also available on our Austin History Center Digital Collections site. Other online collections with digitized text-based materials are described on our Online Collections page. 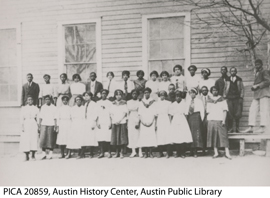 The General Collection Photographs (also called the Austin Files) consist of files organized by subject, biography, and street address ranging from the beginnings of the city to the present day. The photographs come from local citizens, city departments or other organizations. The subject files cover a wide range of topics. Only a small portion of these photographs (about 650) have been digitized. Image: [Anderson High School Students], PICA 20859

This collection contains photographs which document over five decades of history of Bergstrom Air Force Base, originally known as Del Valle Air Base, from the 1940s until 1993. The photographsdepict the buildings on the base; personnel; aircraft in flight and at base; and other scenes of base activities including drills, ceremonies, and festivals. The photographs also document the closure of the Base and its transformation into Austin’s municipal airport in the 1990s. More than 250 photographs from the collection are available online through the Portal to Texas History. The finding aid for the collection is available through Texas Archival Resources Online. Image: [Aircrew Class 69-10B], 1968, AR.2000.024(121)

Chalberg Collection of Prints and Negatives 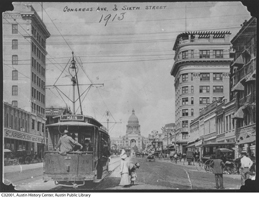 The bulk of the Chalberg Collection images cover Austin from 1900 to 1941, although some images of 19th century Austin are included. The collection comes from  the Ellison Photo Company. The Company was started in 1900 by E. P. Jordan as the Jordan Photograph Company. In 1914, Alfred Ellison and E. P. Cravens bought the company from Jordan's widow and it became the Jordan-Ellison Photo Company. By 1919, Ellison was the sole owner, Jordan was dropped from the name. Russell Chalberg joined the company in 1955 and purchased Ellison's interest in 1963. More than 250 images from this collection are viewable on the Portal to Texas History. Image: Congress Ave. & Sixth Street, C02001

Dewey Mears was the preeminent architectural photographer in Central Texas in the late 20th century. Mears began his career in Austin, taking a variety of jobs, including advertising and event photography. By the mid-1950s he focused his efforts on architectural documentation. Mears reproduced renderings and drawings, photographed building construction, and documented finished buildings, especially buildings in the celebrated mid-century modern style. More than 20 architectural firms and 16 individual architects are represented in the collection. Photos also depict events, people, and organizations of Austin from 1945-1990s. Hundreds of photographs are being digitized by the Portal to Texas History. Image: [Roessner Residence Interior], DM-53-C17562B

Frank Caldwell (1883-1962) was a lifelong resident of Austin. Though he worked as a traveling salesman, his passion was Texas history and he spent much of his time collecting materials on the topic. His collection contains hundreds of photographs documenting various sites, towns, events, and people of Texas from about the 1880s through the 1930s. It includes a mix of personal snapshots and professional photographs. More than 250 photographs are available online through the Portal to Texas History. Image: [Boy Dressed as a Cowboy], AR.X.016(D116)

The Hubert Jones Glass Plate Negative Collection contains 466 glass plate negatives that document late 19th century Austin life. It includes street scenes, historic buildings, and portraits. Hubert Jones, the donor of the collection, was an Austin resident and University of Texas Professor. The extremely delicate nature of glass plate negatives has hitherto made the vast majority of these images unavailable to the public. This digitization project allows patrons access to all of these unique images from our local history. The project was funded by a TexTreasures grant made possible by a grant from U.S. Institute of Museum and Library Services to the Texas State Library and Archives Commission under the provisions of the Library Services and Technology Act. Image: [Unidentified Family], circa 1880s-1890s, J025

The Bicklers were a family of German descent who settled in Texas in 1872. Jacob Bickler married Martha Lungkwitz, daughter of Prussian immigrant and landscape painter Hermann Lungkwitz. Jacob worked at the General Land Office where Martha had also worked as the first female employee of the state of Texas. After leaving the Land Office, Jacob taught in various schools until he founded the Texas German and English Academy, a private school for boys, in 1877. In 1887 when he became Superintendent of the Galveston public schools and returned to Austin in 1892 when he founded the Bickler Academy. Photographs in the collection document the Bickler and Lungkwitz families and life in Central Texas in the late 19th and early 20th centuries and include portraits of other prominent individuals, organizations, and events. Image: [Bickler Family], AR.Y.005(2046)

The Neal Douglass Photograph Archive consists of over 50,000 photographic negatives. Douglass was the first photographer for the Austin American-Statesman and he ran his own studio alongside his journalism work. Photographs in the collection primarily consist of his commercial work from the 1940s to the 1970s. His clients included governors, legislators, civic leaders, and people from all walks of life. Nearly 4,000 images from this collection are viewable online through the Portal to Texas History. The finding aid for the collection is available through Texas Archival Resources Online. Image:Cowboy Rope Trick, ND-nd-A001-06

Extension services in Texas began in 1915 when the Texas Legislature assigned administration of the Texas Agricultural Extension to Texas A&M University and established the Cooperative Extension Program administered by Prairie View A&M. Because of segregation practices in Texas, African-Americans were served through the Negro Extension Service program. This collection documents services and programs including animal husbandry, crafts, domestic education, gardening and agriculture, and home improvement. Especially well documented is the annual Food and Livestock Show held each year at Rosewood Park. The majority of the photos are candid snapshots depicting the participants at work in their classes and activities. More than 250 photographs from the collection are available online through the Portal to Texas History. The finding aid for the collection is available through Texas Archival Resources Online. Image: [Children and Award-Winning Cow], AR.2000.025(053)

The AHC has a channel on HistoryPin which allows photographs to be geo-located on a map and searched by timeframe. We have over 100 photographs from our General Collections and Archival Collections viewable on our channel.