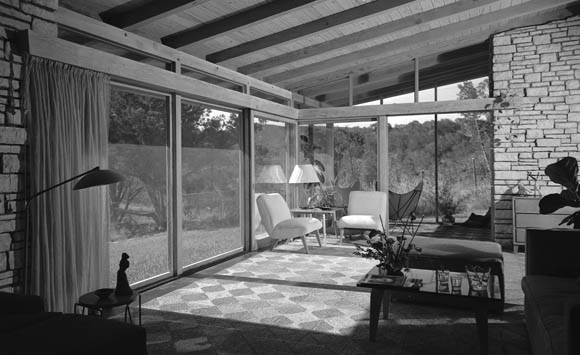 Dewey Mears was the preeminent architectural photographer in Central Texas in the late 20th century. Originally from Lamesa, Texas, Mears began his interest in photography as a teenager. He studied in Lubbock, opened his own studio in Levelland, and was an official US Army photographer during World War II at Camp Swift. After being discharged, Mears began his career in Austin, taking a variety of jobs, including advertising and event photography. By the mid-1950s he focused his efforts on architectural documentation. Mears reproduced renderings and drawings, photographed building construction, and documented finished buildings, especially buildings in the celebrated mid-century modern style. Among the architectural firms represented in the collection are Jessen Jessen Millhouse & Greeven, Fehr & Granger, Kuehne Brooks & Barr, and Page Southerland Page, among many others. Prominent buildings pictured include Austin’s Municipal Auditorium, the Flawn Academic Center at the University of Texas, the Commodore Perry Hotel, the Driskill Hotel, and Villa Capri restaurant and hotel. In 1955 he became president of the Austin Photographers Guild and in 1956 received his Master’s Degree from the Photographers’ Association of America. In 1965 he became president of the Texas Professional Photographers Association and during his tenure he began their magazine, the Texas Professional Photographer. Over the years he earned 17 trophies from the Austin Guild and the TPPA.

Donated by Mears’ family to the AHC in 2014, the collection has remained completely inaccessible to researchers until now. With funding from the U.S. Institute of Museum and Library Services through the Texas State Library and Archives Commission, AHC staff have cataloged about 40,000 negatives. A selection of digitized images is available through the Portal to Texas History. A finding aid with an inventory of the negatives is on Texas Archival Resources Online.

Austin at Mid-Century: Photographs by Dewey Mears features a selection of photos from the Dewey Mears archive focusing on mid-century modern design. The exhibit is on view from August 29, 2017-January 14, 2018 in the David Earl Holt Gallery at the Austin History Center. Read more.

Fehr and Granger, Architects: Austin Modernists is on view from August 15 to November 15 at the Austin Center for Architecture and features many of Dewey Mears' photographs of buildings by the local architectural firm. Read more. We also have an online version of the exhibit.