Skip to main content
warningOur website is currently undergoing updates and some information may be temporarily unavailable or inaccurate. Please contact us by phone or email if you have any questions. We apologize for the inconvenience. 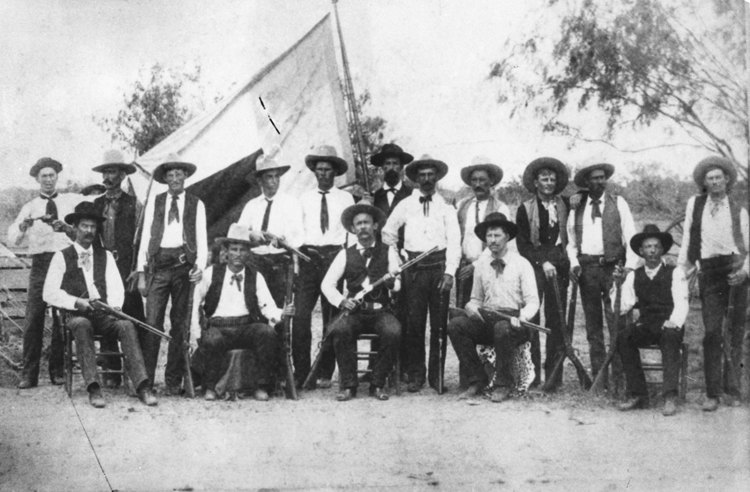 The Texas Rangers were formally formed in 1835 with a unit of 56 men. Officers were paid $1.25 a day but had to supply their own mounts, arms, equipment and rations. During the Texas Revolution they served as scouts and couriers. They achieved worldwide fame during the Mexican-American War, serving as Gen. Zachary Taylor’s “eyes and ears” and helping with the battle of Buena Vista. After the war, the United States was responsible for protecting the frontier and the Rangers had little function. They continued to participate in fights with Mexican nationals, though their brutality sometimes embarrassed and scandalized the Texas government. This photograph depicts Company “E” Frontier Battalion taken at Alice, Texas in 1892. From left to right: Pleasant J. McNeel, D. Seth Roberson, Rigdon Terrell, H. Forrest Townsley, John Cameron, Jim S. McNeel, Jr., Everett E. Townsend, Capt. James S. McNeel, (man with beard, not a Ranger), Charles Premont, “Bud” Rider, Charles A. Johnson, Louis A. “Fritz” Pauli, Rutledge Evans, Luke Dowe, and Robert S. Townsley.